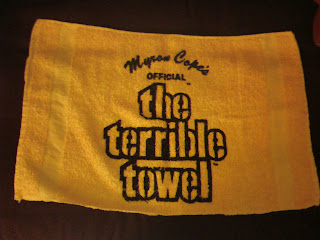 There will be a lot of these waving in Pittsburgh tonight. It's game day. Finally.
After listening to previews, analysis and predictions, we finally get to see a game between the Steelers and Ravens. This game has all the makings of a classic. In fact it reminds me of the mid-1970s, when the Steelers and Raiders played some classic AFC Championships.
This was one of the best, from the 1975 game at Three Rivers Stadium in Pittsburgh. This clip is a touchdown by Franco Harris.
Another clip from the game, this one a touchdown catch by John Stallworth.
The best part about both rivalries has been the quality of the play. Both teams hit hard and were successful. This year, the Steelers won both regular season games, but each was close. It is fitting both are back for a third match-up.
Expect few points to be scored in the cold Pittsburgh weather. I may be biased, but I think the Steelers can get it done. The game will be close again, but I think the Steelers can make the plays when the game is on the line.
Hopefully they'll be lots of celebrating tonight in Heinz Field.
Posted by Derrick Gingery at 1:43 PM