The White Sox reportedly have made a deal to bring Ken Griffey Jr. to town, according to a report on FoxSports.com.

Griffey still must approve the deal, and the story also did not mention what the Sox would give up to get him.

Junior has been with the Reds for several years and fought numerous injuries during that time. But he has been more consistent the last couple years and this year hit his 600th career home run.

plays first base, but Swisher played there this season while I wonder where he is going to play. The story mentions center field, but that is where Nick Swisher and Brian Anderson play. Carlos Quentin and Jermaine Dye play left and right, respectively. He can't DH, because Jim Thome takes that spot. Manager Ozzie Guillen would have to sit someone and the Fox Sports story indicates that may be Paul Konerko. KonerkoKonerko was hurt.

Konerko could go to the bench (or see less time), Swisher to first and Griffey to center, according to the Fox story.

The deal is not done yet and the trade deadline is this afternoon, so maybe some more moves are coming. This could be an offensive upgrade, but I don't know about a defensive improvement.

Update (1:104 p.m.): Griffey accepted the trade, according to a new FoxSports.com story. The Sox will give up Nick Masset and Danny Richar, the story said, citing CBS Sportsline.

Posted by Derrick Gingery at 9:02 AM No comments: 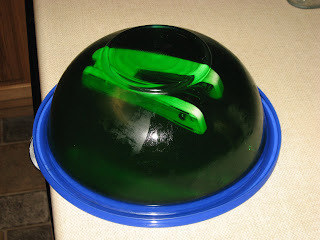 And here is the video of the very first stapler-in-jello prank, from the British version of The Office. The NBC show was adapted from it.

Posted by Derrick Gingery at 9:39 PM No comments: