A tribute to Hall of Famer Rod Woodson 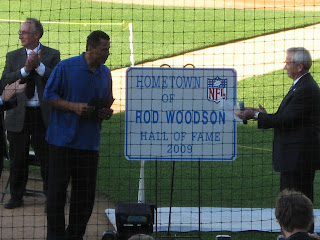 Former Steeler Rod Woodson, a native of Fort Wayne, will be inducted into the pro football Hall of Fame this summer.
Woodson entered the league with the Steelers, where he was one of the greatest cornerbacks ever. He had 71 interceptions in his 17-year career, including 12 returned for touchdowns. And yet, when he returned to the Summit City to be honored, he did not speak much about football. He talked about how much the Fort Wayne community meant to him and how it would enter the hall with him.
The city of Fort Wayne will place signs at city entrances denoting Woodson's accomplishment. It is richly deserved, even though he played football for that other school before reaching the pro ranks. And of course, he would go into the Hall of Fame as a Steeler, if possible.
Here is a good Woodson highlight video.
Posted by Derrick Gingery at 7:39 PM No comments: